How was this French wonder able to stay in production for 41 years?

There aren’t many around today but that doesn’t mean five million Citroen 2CVs — or Deux Chevaux (two horses) — weren’t produced over a period spanning an amazing 41 years.

It’s a feat equaled by only a very few cars before or since. But the truly remarkable thing about the car was that it could barely be considered a car at all.

Originally envisioned by company founder and chief engineer André Citroën, the 2CV (a government designation relating to the car’s taxable horsepower rating) would prove to be the perfect vehicle to get his fellow citizens moving — albeit slowly — under their own power.

Citroën himself would not live to see the 2CV come to fruition. He died virtually penniless in 1935, shortly after selling his bankrupt company to Michelin Tire. A year later, Pierre Boulanger, a Michelin-appointed director-general, began work on a companion vehicle to the larger Traction Avant, the only car manufactured by Citroën at the time.

As with Ferdinand Porsche’s Volkswagen Beetle, the four-door 2CV was conceived as an inexpensive people’s car. The prototype 2CV sedan featured a retractable roof, trunk lid and doors covered in cloth. Boulanger referred to his creation as “four wheels under an umbrella.” A single headlight, a speedometer and ammeter were the only gauges. The flimsy canvas-covered seats resembled lawn furniture and could easily be removed from the car for use as such. 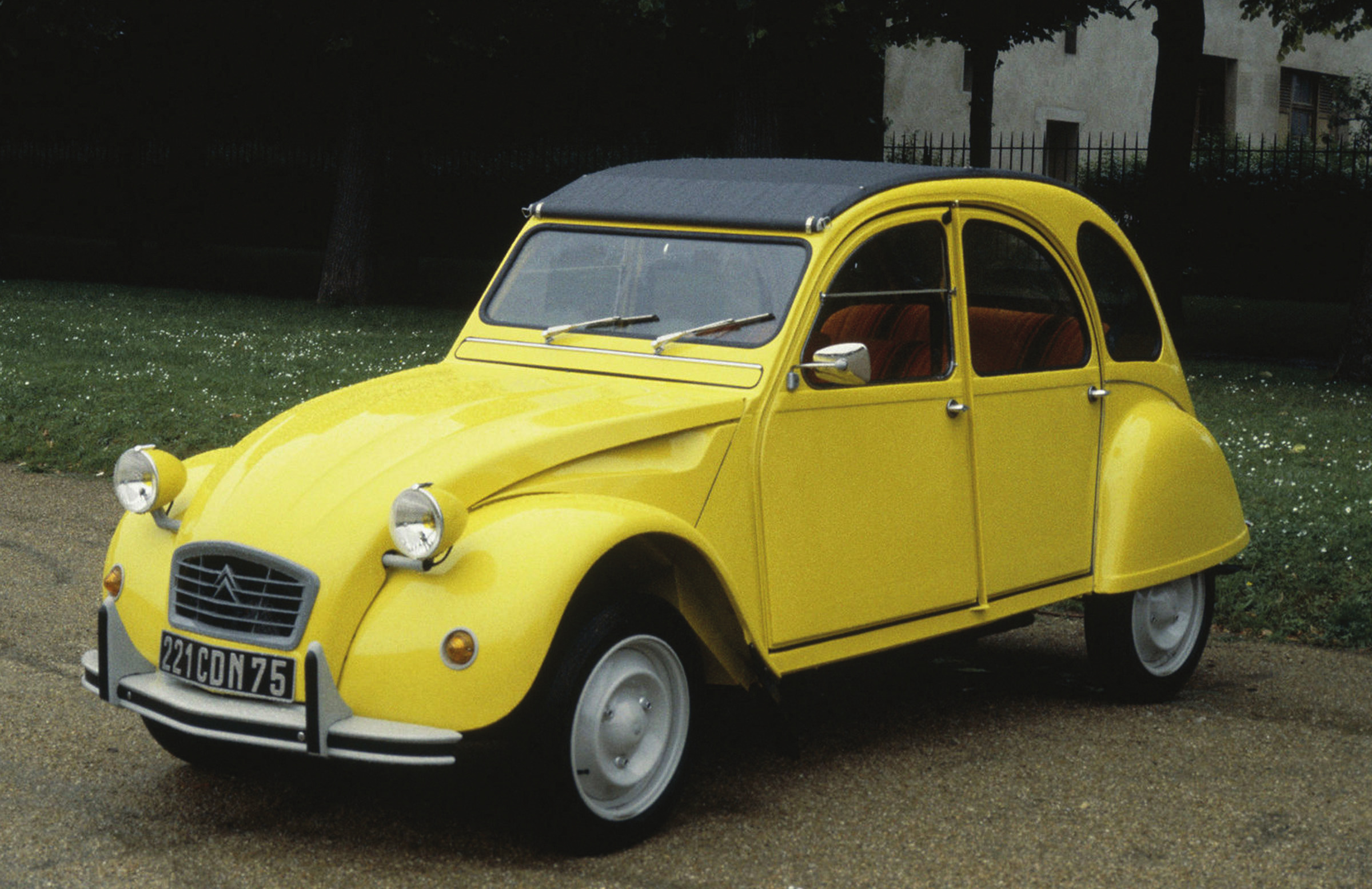 One of the more innovative aspects about the 2CV was its softly sprung independent suspension. Boulanger decreed the car should be capable of carrying a basket of eggs across a plowed farm field without cracking a single shell.

Production commenced in September 1939 but was halted with the beginning of the Second World War. As the battles raged and Nazi occupation reached France, Boulanger and his associates revamped and updated the 2CV’s design, ready for the day when they could return it to the assembly line.

Nine years later in 1948, a reconstituted 2CV (fitted with metal doors and two headlights) was presented to the international press at the Paris Motor Show.

Almost immediately, the sounds of laughter and derisive comments echoed throughout the Salon. Amid the glitz and glamor of more exotic machinery, the sad-looking bare-bones 2CV, with its corrugated tin-hut-looking body and flip-up hinged side windows, appeared to be a faux pas of nightmarish proportions. 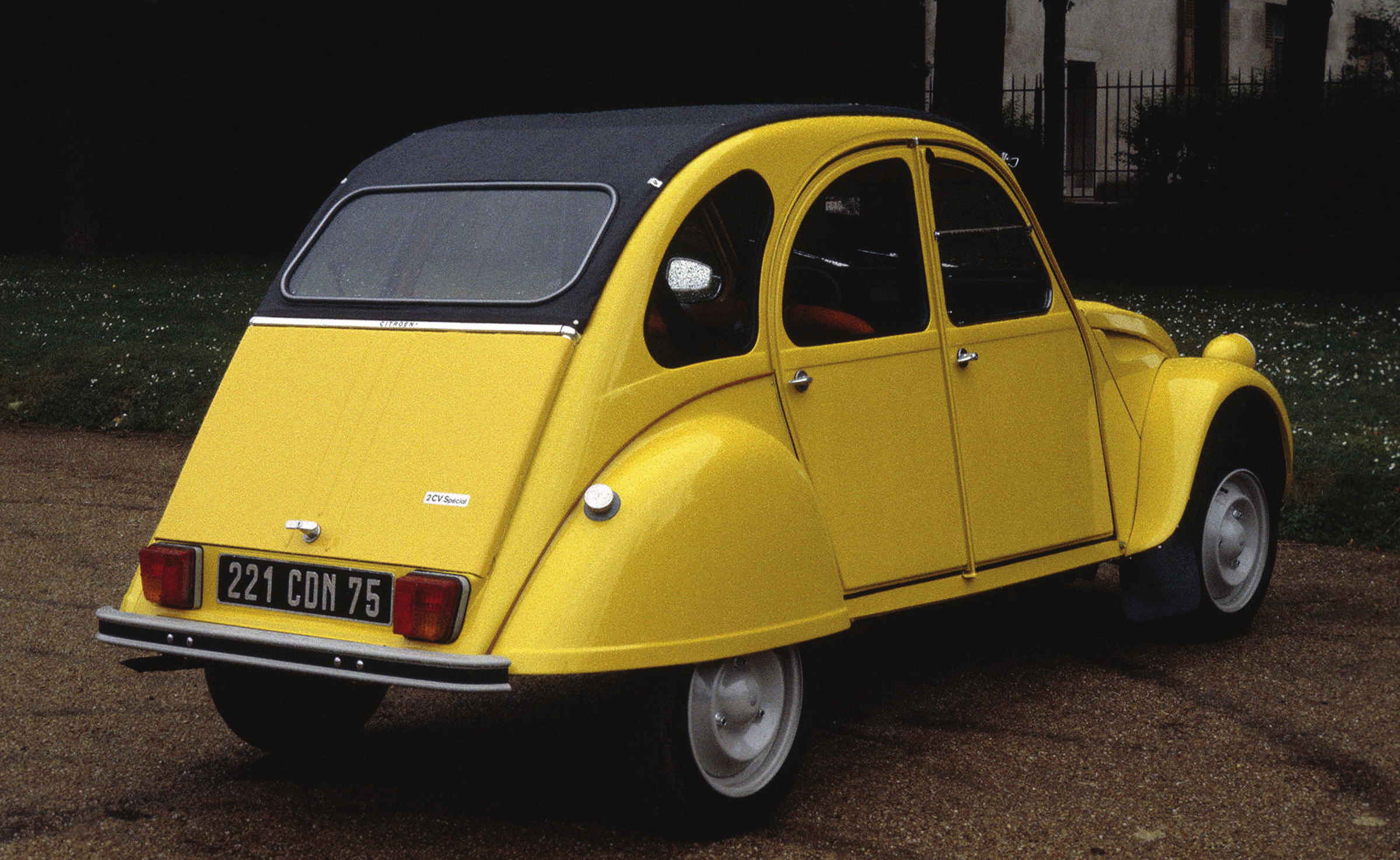 The car-hungry French, however, ignored such journalistic snobbery and saw the car for much more. The Deux Chevaux was an immediate hit, and for some obvious reasons. The war had devastated the nation’s economy, which, by the late 1940s, was only beginning to recover. With money in short supply, cheap wheels were preferable to no wheels at all.

The 2CV was also inexpensive to service. For example, the screwed-on body panels and hinged doors could easily be removed for repairs. In fact, the entire body shell could be peeled from its steel chassis by loosening just 16 bolts. The car could even stretch an imperial gallon of gasoline (4.5 litres) to cover 56 miles (90 kilometres).

The only obvious downside — not counting oddball design — was its complete lack of performance. Given enough time and on prairie-flat pavement, the 2CV might eventually reach a much-anticipated top speed of 69 kilometres per hour.

Throughout its existence, the 2CV was given frequent (and much desired) mechanical and exterior upgrades. Engine displacement was eventually increased to 602 cubic centimetres, while horsepower topped out at 33. Eventually, the 2CV was capable of reaching 110 kilometres per hour. 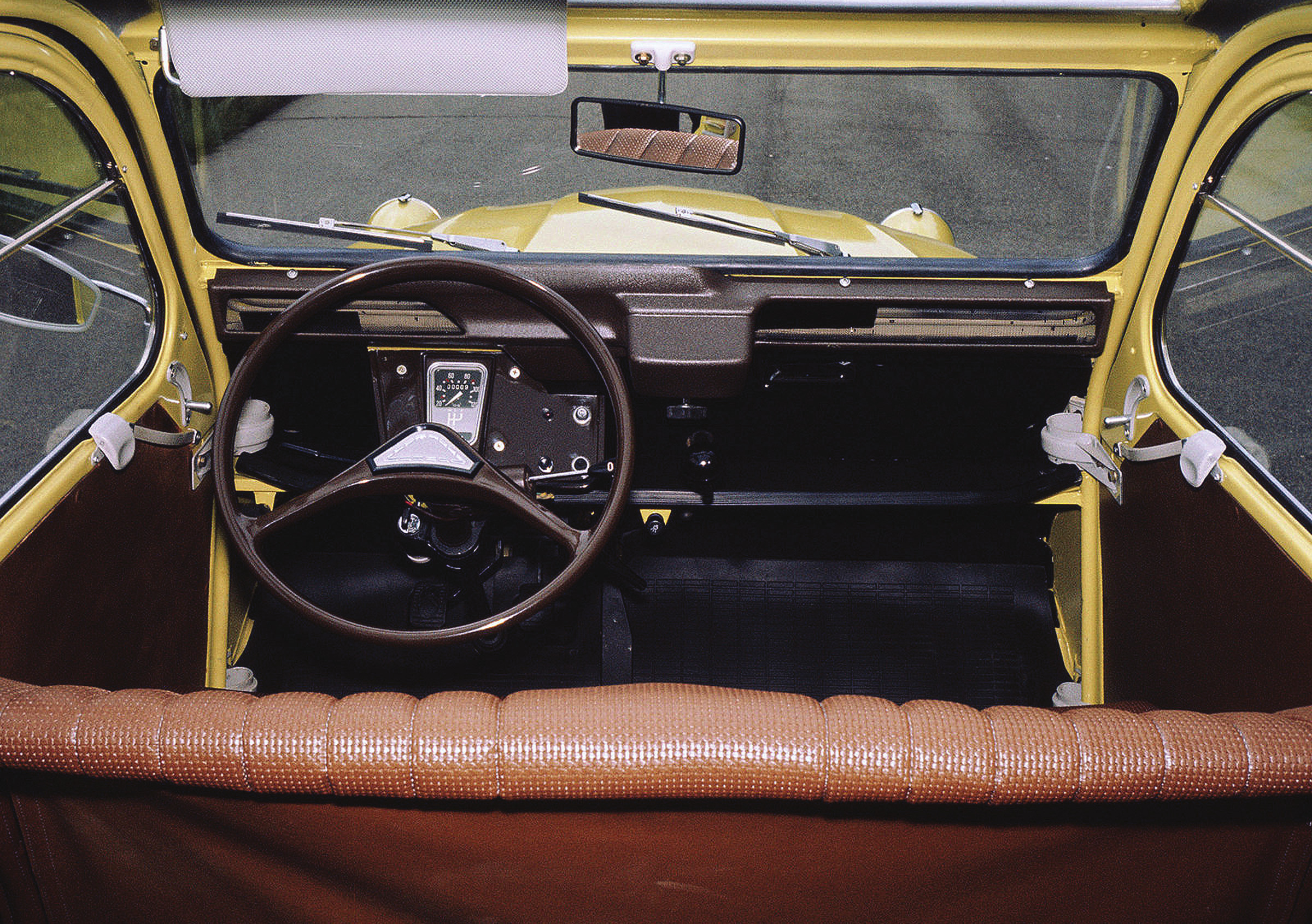 Available in a single shade of grey until 1959, some interesting two-tone combinations added some charm.

As the Deux Chevaux grew in global popularity, so did the number of manufacturing locales. At its zenith, factories in 12 countries were busy satisfying a steady demand for these econo-boites (boxes).

In its final two years, the 2CV was manufactured solely in Portugal under the Charleston name, complete with formal paint scheme, deluxe interior and slightly sturdier bumpers.

By the end of its life, the once inexpensive (less than $1,000) car was retailing for around $10,000. Although it had attained cult status, production volume no longer warranted the effort and Citroën’s once innocuous but lovable vehicle came to the end of the line in July 1990.

Loved for its honesty, economy and durability, the mighty Citroën 2CV helped restore economic health to a nation consumed by war. It also provided the advantages of personal mobility to an otherwise disadvantaged society. Along the way, it even managed to put a smile on the faces of those fortunate enough to drive, or even ride in one.