Wise motorists often shelter their pricey cars and motorcycles and find a cheap set of wheels to slog through the darkest months.

Tapped to pull Santa’s sleigh through the night on Christmas Eve, reindeer are pretty adept at dealing with winter.

Better known as caribou here, their noses are specially designed to warm the air before it gets to their lungs, their hooves expand in summer when the ground is soft, and both males and females grow antlers presumably for collision protection.

Rear-wheel-drive Mustangs and Corvettes aren’t nearly as well-equipped to deal with Canada’s most loathsome season. Snow, ice and brine wreak havoc with our rides. Wise motorists often shelter their pricey cars and motorcycles and find a cheap set of wheels to slog through the darkest months.

Drive a beater and you reduce the rust, stone chips, excessive mileage and bad-weather mishaps that will take the shine off your fair-weather crush. Even the best drivers can’t prevent others from sliding into them in wintery conditions.

Here are six reliable, no-fuss winter beaters you can find for around $5,000. Note that most of our picks are front-drive only – a perfectly functional solution when equipped with a set of four snow tires. 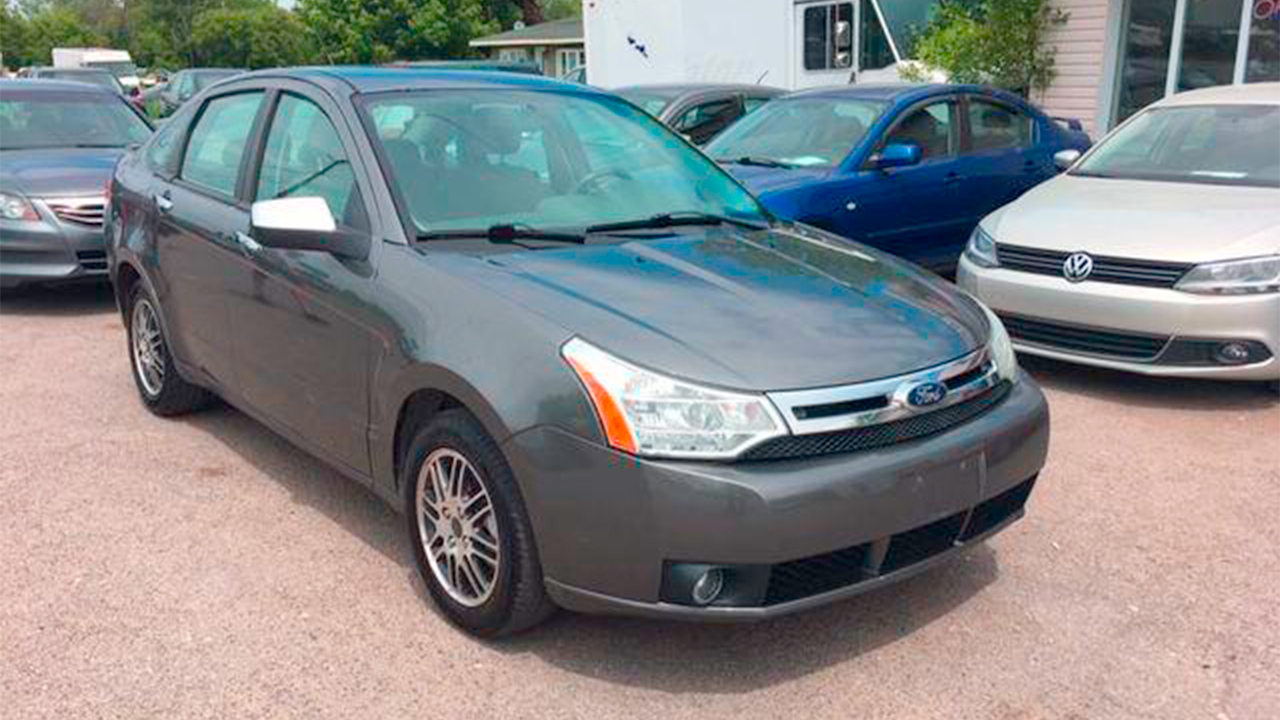 The Ford Focus hasn’t always earned glowing admiration. The early builds were subject to countless recalls, and the latest generation was plagued by a clunky dual-clutch automatic transmission that gave up the ghost early. The sweet spot for the Focus was right around 2009 to 2011, by which time Ford had learned how to put them together well.

The Focus brought unexpected sophistication and refinement to the economy class, with stellar handling and smart design both inside and out. Too bad the back seat is a little tight and interior materials were selected on a budget. Gone were the hatchback and wagon, but Ford curiously added a coupe that nobody remembers asking for.

You’ll find just one engine, a 2.0-L four-cylinder good for 140 horsepower, working with a proven four-speed automatic or five-speed manual transmission. But the throttle body is sometimes the cause of a stalling problem. A malfunctioning air conditioner may be traced back to a leaking compressor shaft seal. Other setbacks include faulty alternators, ignition switches, window regulators and wheel bearings in small numbers. 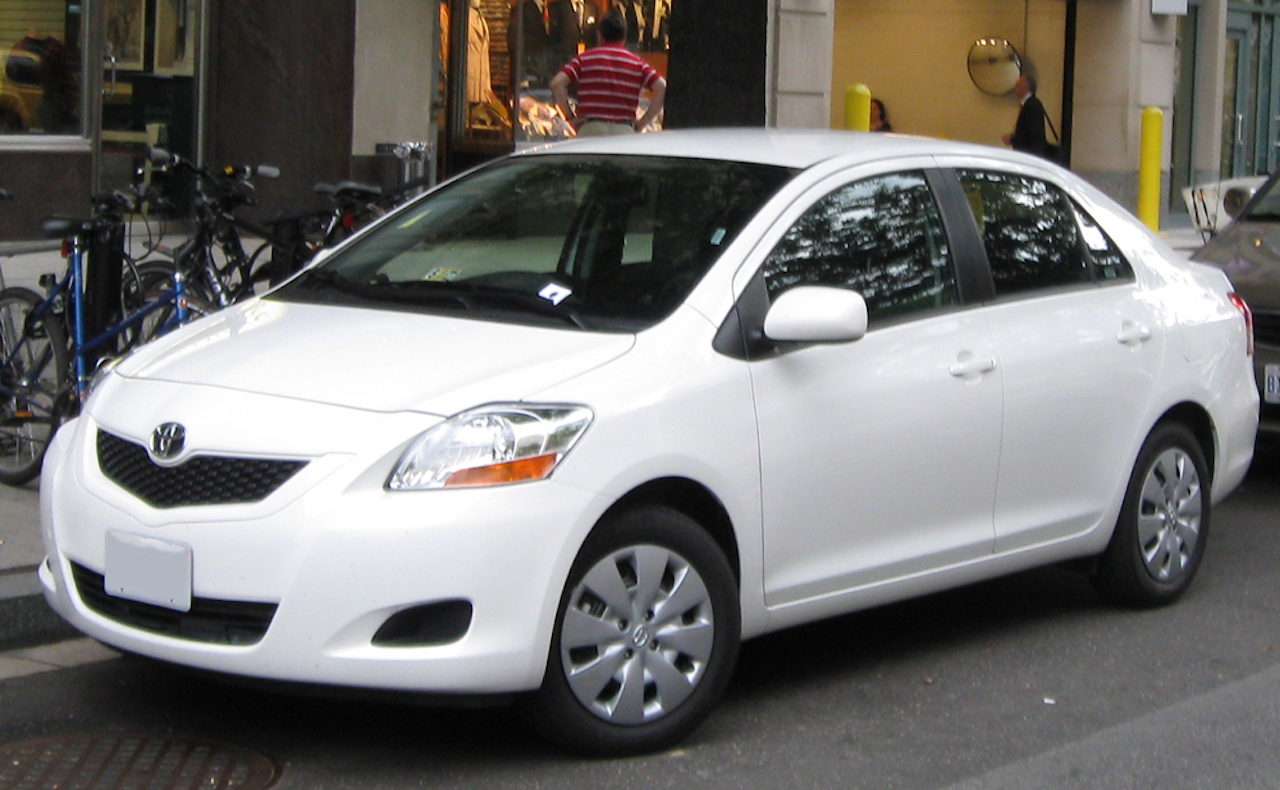 Don’t laugh. If you’re looking for basic transportation, we can’t suggest a better solution than this. The Yaris is easily one of the most reliable cars you’ll ever find. It offers tall seating, easy entry and egress, good visibility and great fuel economy. Unfortunately, you’ll have to get used to the weird centre-mounted instruments. They’re said to be easier to focus on and can’t be obscured by the steering wheel.

We recommend the Yaris four-door sedan: it’s a half a metre longer overall than the minuscule hatchback, riding on a wheelbase 9 cm longer – which, mercifully, improved backseat legroom somewhat. Its all-aluminum 1.5-L four cylinder is a sophisticated twin-cam engine good for 106 hp, which is just enough to pull this lightweight around.

Owners are delighted with the made-in-Japan Yaris; they’re among the most satisfied drivers we’ve found on the Internet. Some have had bad luck with the air conditioner (road debris can puncture the condenser), a few water pumps have failed, deep snow may pull the engine fairing off the bottom of the car, and the clearcoat and paint might peel off early builds. 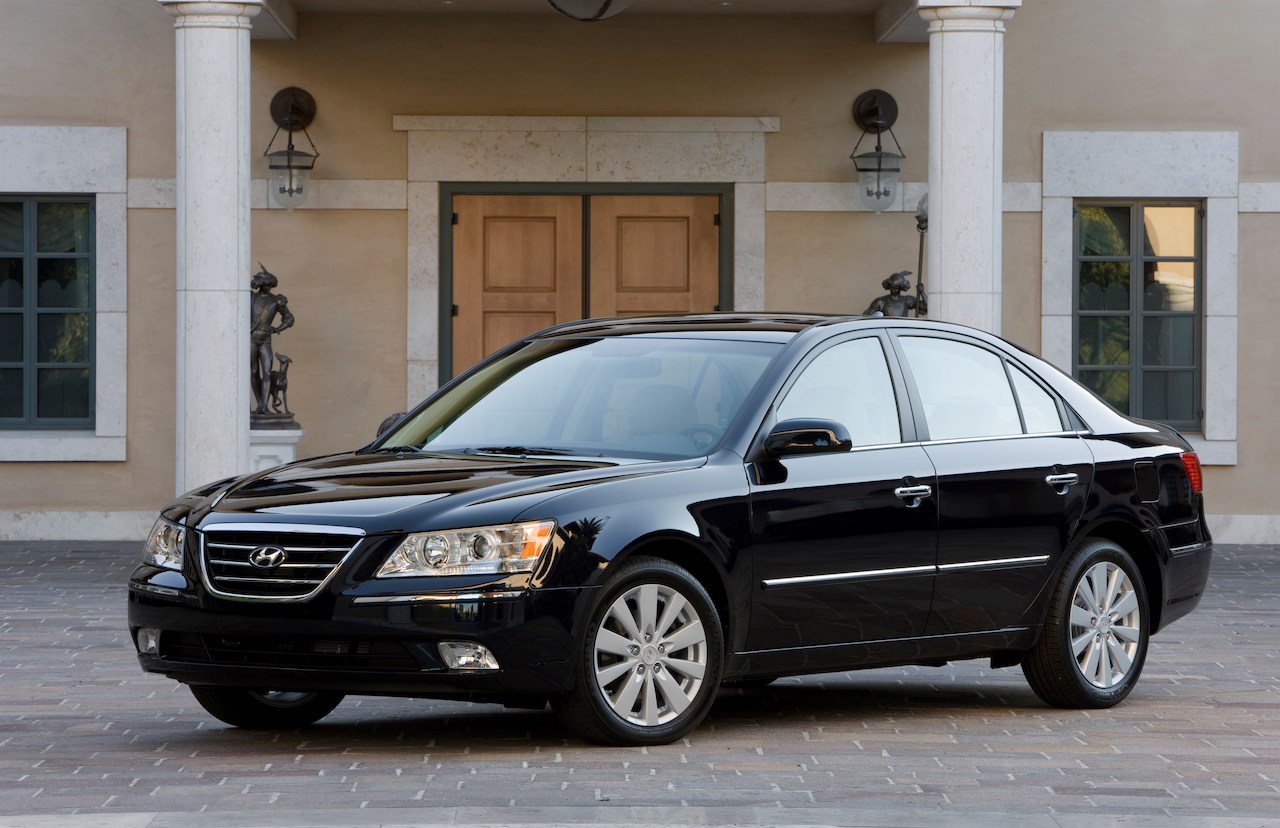 Hyundai finally had a hit on its hands when it released the 2006 Sonata, which was aimed squarely at the Honda Accord and Toyota Camry (engineers reportedly benchmarked the Audi A6). Sleek and roomy, the front-drive Sonata no longer leaned like a listing ferry thanks to Honda-like control arms up front and a multi-link layout in back with gas shocks and anti-roll bars all around.

Buyers could choose between two engines: Hyundai’s first all-aluminum 2.4-L four cylinder that made 162 hp, and the optional 3.3-L V6 with 234 hp and 226 lb-ft of torque. A 2006 Sonata made headlines when an Arizona man was recorded traveling 236 km/h (147 mph) past a photo radar installation, aided by a slight decline and tailwind. Who knew?

Common repairs have addressed broken sun visors, faulty windshield washer pumps and a slow shifting automatic tranny. There’s also been an epidemic of busted exterior door handles. A suspension knock was traced to faulty strut bushings in some cars. Still, this is a better sedan than the Sonata that replaced it. 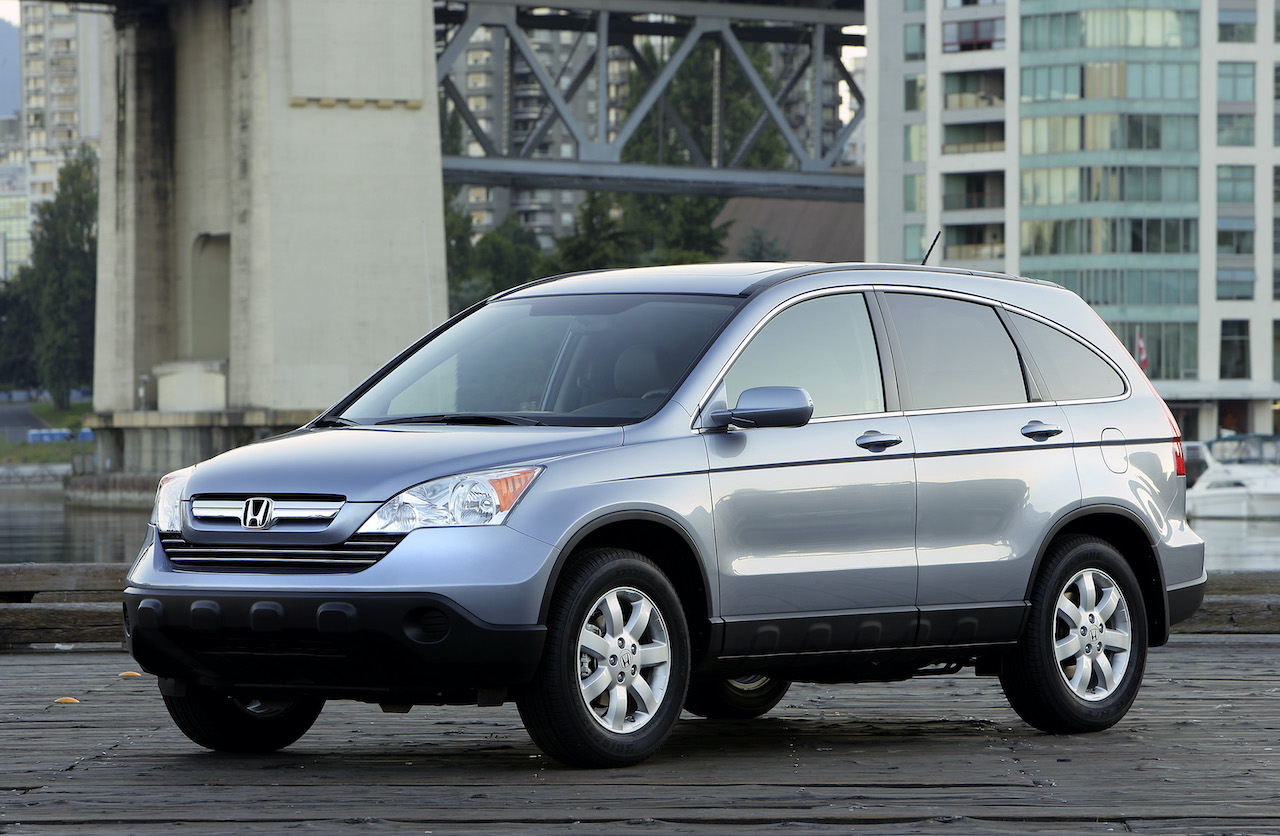 With its sensible size, spacious interior and capable all-weather drivetrain, the third-generation Honda CR-V checks all the boxes as a winter beater. It’s no backwoods trailblazer and, for once, the styling doesn’t pretend to make it so. Launched for 2007, it was the first CR-V without a spare tire suspended on the rear door.

Power is supplied by Honda’s venerable K-series 2.4-L four cylinder found in the Accord and Element, good for 166 hp and 161 lb-ft of torque. The lone transmission was a five-speed automatic; the manual retired with the previous generation. The base LX is front-drive only, while Honda’s clever all-wheel-drive system is standard in every other trim.

The CR-V is a coveted used vehicle that commands a premium. You can’t find one at our $5,000 price point with less than 200,000 kilometres, but that’s okay. The K-series engine will easily double that distance without a hiccup. Reported mechanical snafus include malfunctioning power door locks and power window switches, broken a/c compressors, leaky power-steering racks, bad wiper motors, and fast-wearing tires. 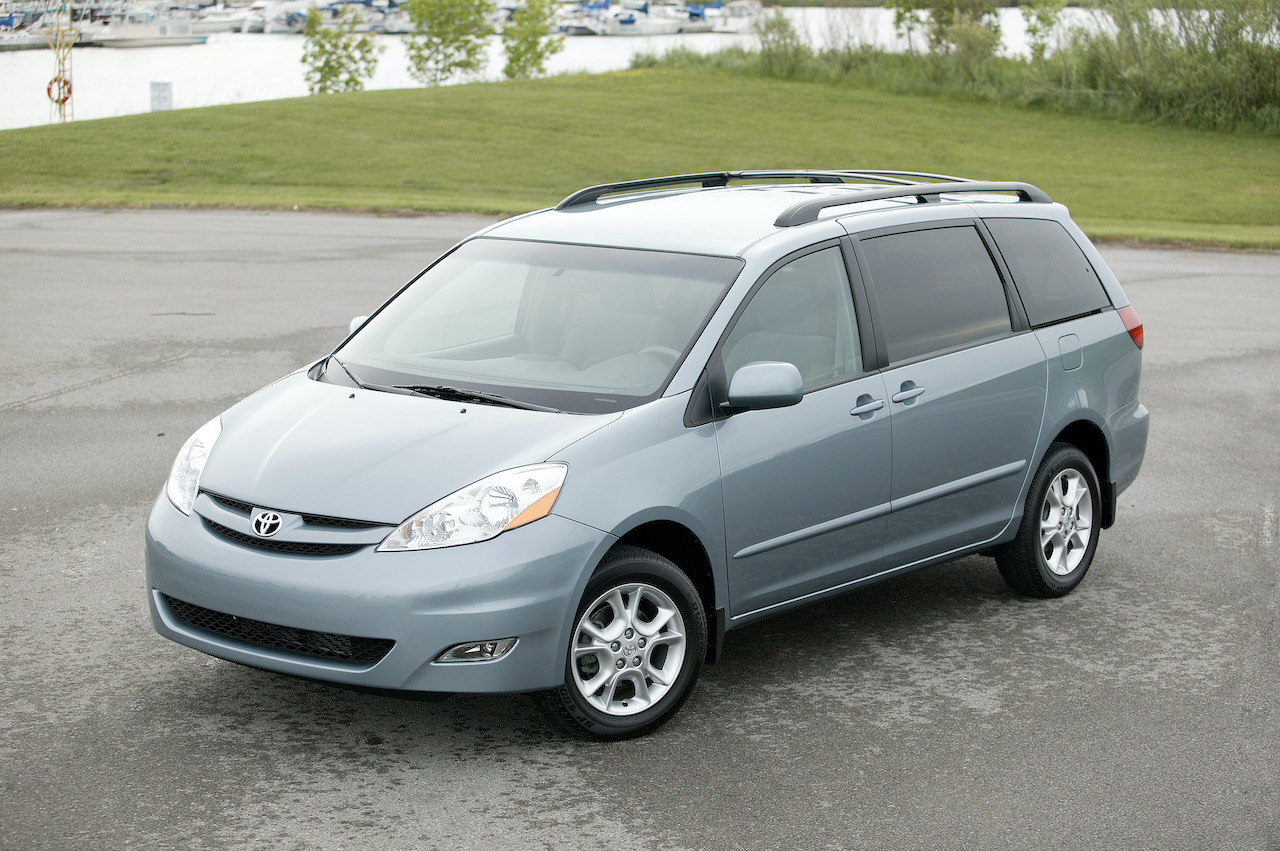 It’s okay to crave a minivan. The previous-generation Toyota Sienna offers gobs of space inside with seating for up to eight and fills it with family-friendly cupholders, cubbyholes and enough electrical outlets to power the Griswold’s holiday lights. It features a 60/40-split third row bench that collapses into a deep well and is spring-assisted to make hoisting easier.

This vintage benefits from a smooth 3.3-L V6 engine (also used by Lexus) with 215 horsepower coupled to a five-speed automatic transmission. Dependability is exceptional as the engine/transmission duo is largely bulletproof. How do we know? The Sienna does taxi duty in many cities. It’s the only minivan left on the market with optional all-wheel-drive, and it has the smallest turning radius of any van.

The most common complaint involves the power sliding doors, whose thin cables can snap, and replacement is expensive. Some owners just remove the cables and operate the doors manually. Other issues include leaky radiators and water pumps, faulty air conditioners and weak tailgate struts. Note that the 3.3-L engine still uses a timing belt that has to be replaced every 145,000 km. 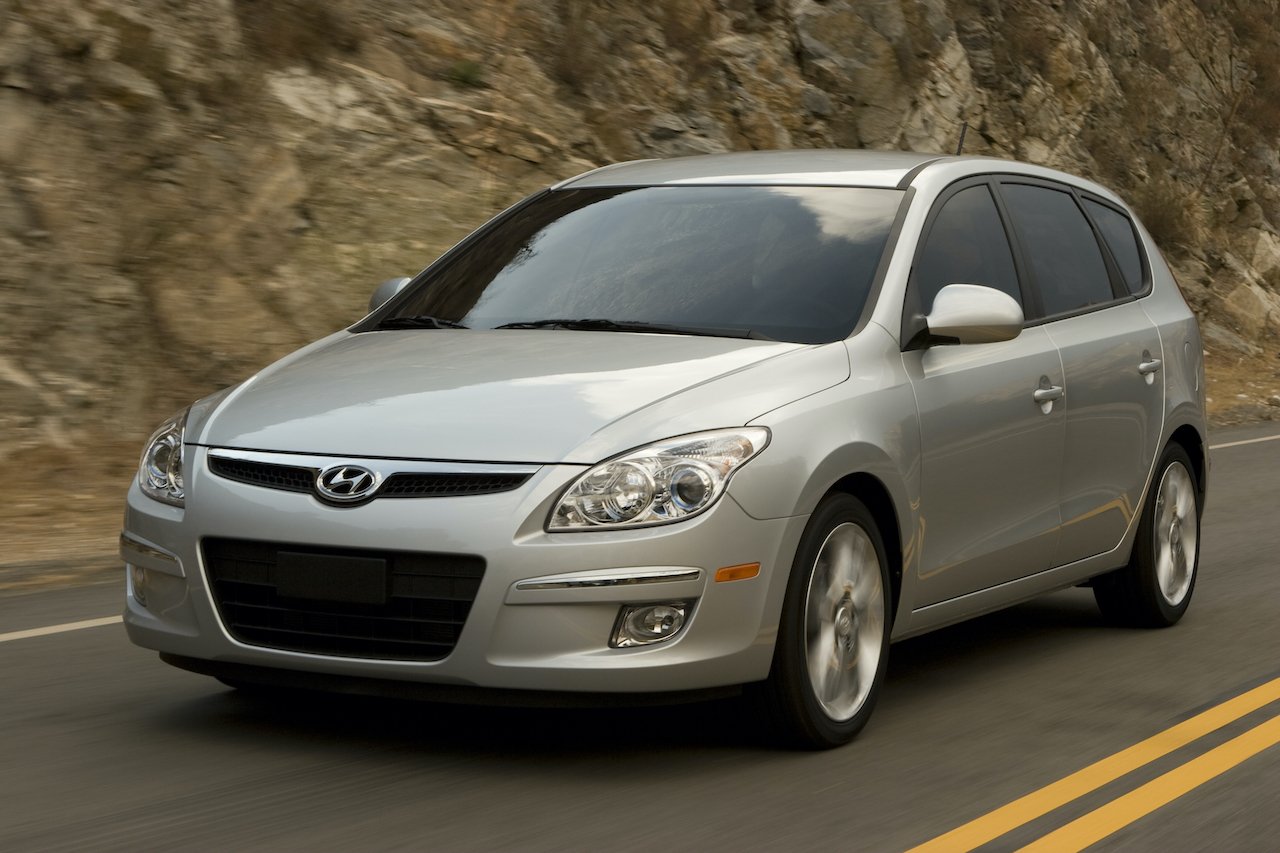 Missing the Ford Focus wagon? Crafted to compete in Europe, the Hyundai Elantra Touring is a well-engineered compact wagon that goes bumper-to-bumper with the Volkswagen Golf, among other Euro nameplates. Conceived at Hyundai’s design centre in Russelsheim, Germany, the Touring (i30 as it’s known there) has enough European DNA to give it a continental accent.

The wagon is motivated by the same 138-hp 2.0-L four-pot engine that powered regular Elantras, but built on a different front-drive platform with stiffer suspension tuning, stronger brakes and steering tweaked for a more spirited driving experience. Being a Hyundai, the Touring came equipped with plenty of extras in a nicely trimmed cabin with great visibility all around.

Mechanical faults are relatively few in number. There are some reports of broken ignition switches and electric power-steering units, and a few slipping automatic transmissions. Beware of the (optional) low-profile tires, whose sidewalls can blow out unexpectedly, say owners. Fuel economy is merely okay for a 2.0-L four banger, yet the wee wagon’s cargo capacity can embarrass many SUVs